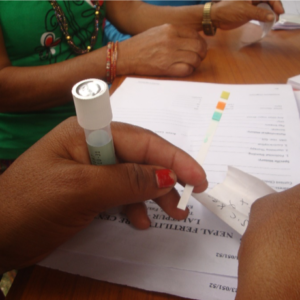 Jhapa district is located in Province 1 of eastern Nepal with the total area of 1,606 km2. The current population of Jhapa is 647,492 and the average population density is around 400 per square km. Birtamod is a head quarter of the district. As Jhapa district is bordered by India in the South, it is also considered as gateway to India.

A two day screening camp was conducted in Damak, Jhapa in April, 2013. Damak Municipality of Jhapa district was selected due to the fact that more than 20000 Bhutanese refugees live there and research related to the HPV risk among refugee communities is still lacking. The camp was carried out to examine the prevalence of HR-HPV infection and cervical abnormalities among Nepali and Bhutanese women. Camps were conducted in conjunction with Nari Sashaktikaran, Jhapa. As is standard practice, all women who attended the camp were provided the following services:

During the camp a total of 701 women were screened. Women were provided both self-collected and clinician collected cervico-vaginal specimens.  These specimens were preserved in a cold chain on a required temperature. It was then sent to United States for the test and the result received was passed to the individual client by NFCC local staff based in Damak. All HPV positive clients are referred for VIA test to the nearby Ghopa hospital as VIA is the mandated primary screening test for cervical cancer by the Government of Nepal. The said doctor was already aware of the camp conducted and the women being referred. Both the women and the doctor were both continually followed up via phone and where possible by in person by NFCC staff to ensure continuity of care and treatment. Those choosing to get treatment in India or other private sector sites were also followed up by phone to ensure treatment had been taken and complete reporting had been done.